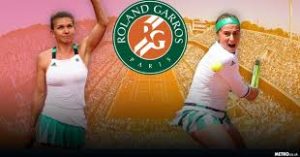 Jelena Ostapenko from Latvia faces Simona Halep from Romania in the Roland Garros final in Paris. Both players will have the chance to win a Grand Slam title for a first time in their respective careers.

The 20-years old Jelena Ostapenko is one of the biggest sensations in the French Open this year. The talented Latvian was not even ranked before the start of the tournament, but she managed to reach the final. She’s currently №47 in the WTA rankings, but her position is going to improve drastically after the end of the tournament.

After beating Louisa Chirico, Monica Puig and Lesia Tsurenko in the first three rounds of the Roland Garros, Ostapenko recorded wins against some really strong opponents in the later rounds. At the 1/8-finals she beat in three sets the former finalist in Paris Samantha Stosur.

In the next round she also beat in three sets the former №1 in the world Caroline Wozniacki. In the 1/2-final she met another of the major surprises in the tournament – Timea Bacsinszky from Switzerland, who was ranked as #30 in the main draw of the Roland Garros. They had a really competitive match, but in the end Ostapenko managed to win with 7-6(4) 3-6 6-3.

This is Jelena Ostapenko’s first Grand Slam final in her career so far.

As for Simona Halep, the Romanian was labeled as one of the favorites to win the tournament before its beginning. She’s ranked as №3 in the main draw. For the 25-years old Halep this is a second final at Roland Garros. She reached the final in 2014 as well, but then she was beaten by Maria Sharapova.

Simona Halep didn’t lose even one set in the first four rounds of the tournament. She was merciless against Jana Čepelová, Tatjana Maria, Daria Kasatkina and Carla Suarez Navarro.

At the 1/4-finals Halep lost its first set in this year’s edition of the Roland Garros, but after all she managed to defeat Ukraine’s Elina Svitolina with 3-6 7-6(6) 6-0. In the 1/2-finals Simona Halep faced Karolína Plíšková from the Czech Republic. She once again needed three sets to win, but after all she beat Plíšková with 6-4 3-6 6-3.

This is the first time when Simona Halep and Jelena Ostapenko meet at the court. You could bet that this is going to be a big day for them. Which one of them will win her first Grand Slam title? We shall wait and see!